Context
AR masks popularity has grown tremendously on Instagram and Snapchat as these companies made AR accessible for everyone and built a creative community around new ways of self-expression. People started to use such face ﬁlters every day, emphasising their curiosity about this emerging technology. Users loyalty to AR forced me as a designer and explorer to consider AR experiments in the ﬁelds diﬀerent from entertainment.
Tasks
My academic interest involves the research of how AR masks can make us more empathetic and help to understand emotions better. I am going to categorise various emotions and visualise them in AR masks. Those masks will serve as triggers for emotional awareness conversations between children and adults. The effectiveness of teaching and learning empathy via AR apps will be compared with the traditional methods through a series of interviews and tests with teachers, parents and preschoolers. 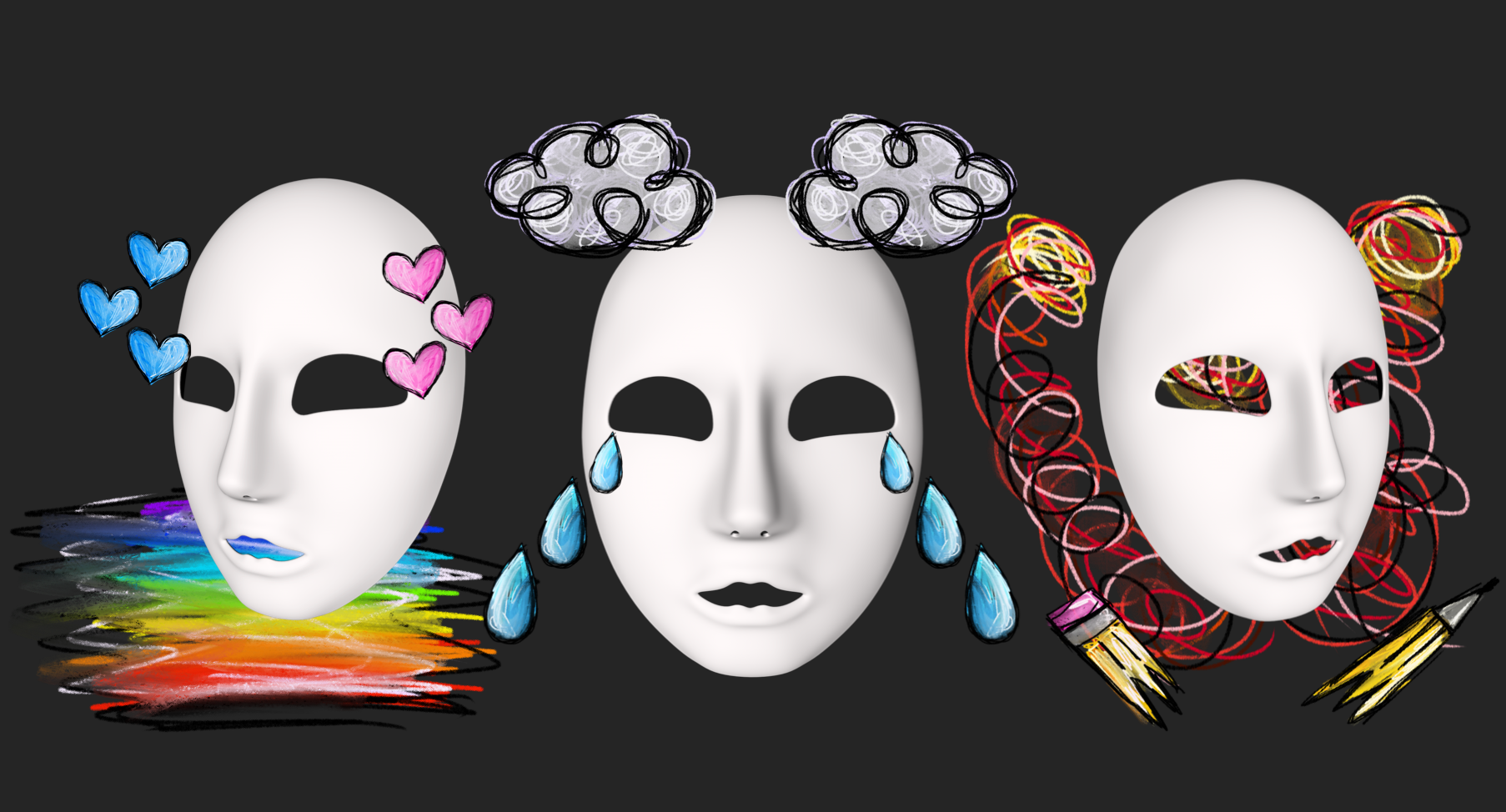 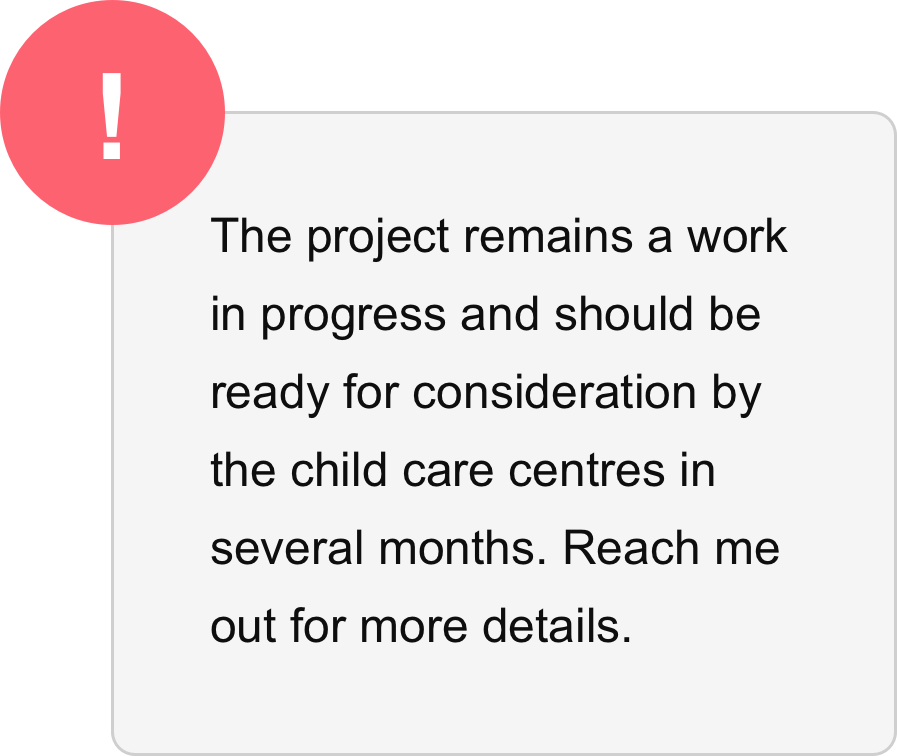 This project aims to integrate augmented reality (AR) advancement into the education process, focusing on teaching emotions to preschoolers. The novelty of this research is emphasised by AR masks adoption, as there are no other studies conducted around this AR implication. Thus, the thesis investigates AR masks possibilities and practical approaches to designing them. It also showcases diverse ways to visualise emotions in AR in context of ‘‘All emotions are OK’’ set of masks.

As my hypothesis of AR effectiveness requires several waves of user tests, the main goal was to suggest a solution that is easy to modify and fast to implement. Thus, it will facilitate the process of integration and will allow testing many different ideas at once.

Due to tight deadlines, a target group was narrowed down to preschoolers 2-6 years old and their parents. Age inﬂuenced signiﬁcantly many design decisions, such as a simple style of illustrations and masks.
Check my video presentation for the EoU degree show →‍ 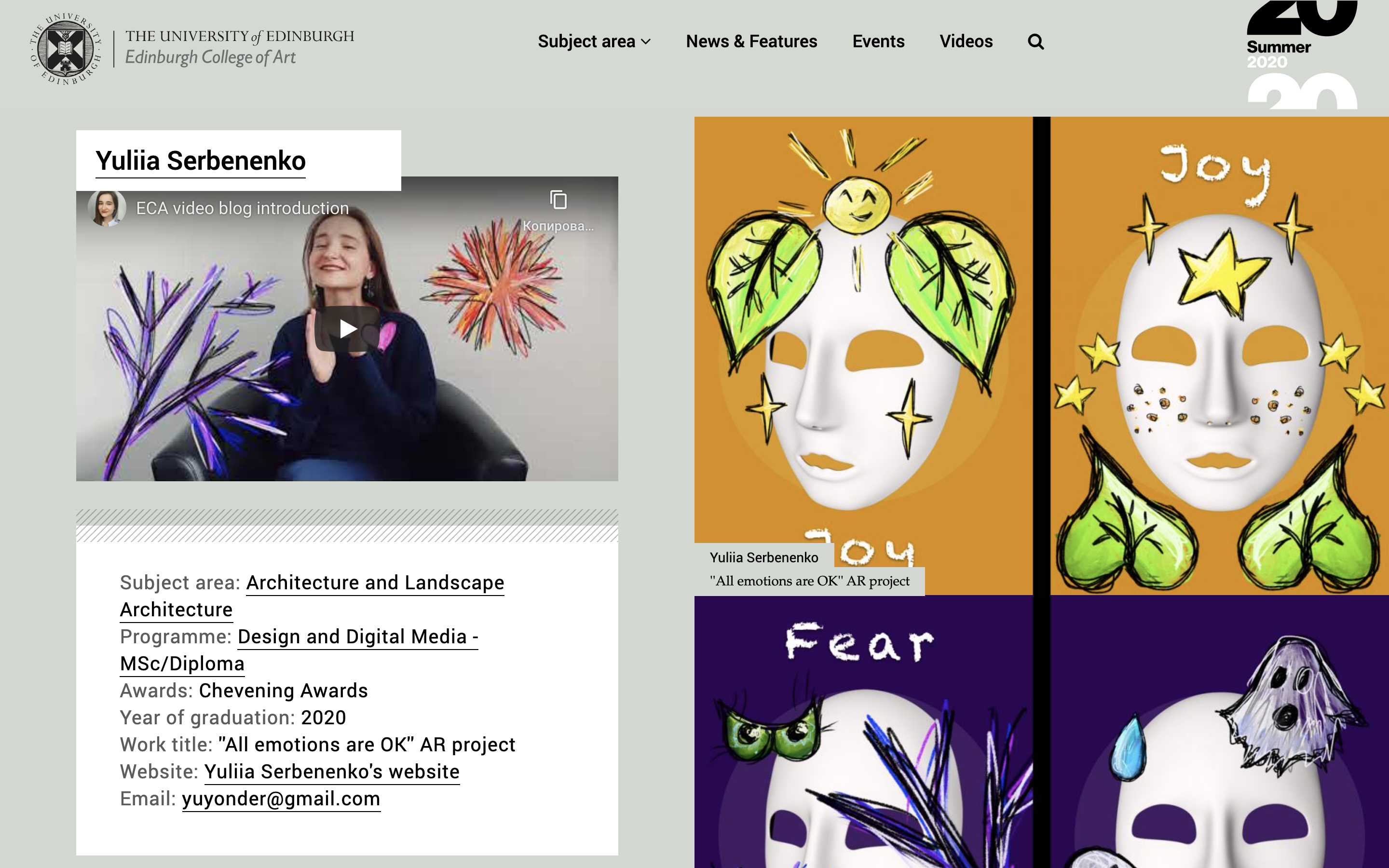 AR mask examples v1
All masks have two possible AR visualisation. With the need for various users tests in mind, I chose the Spark AR tool that allows me to publish and change the concept quickly.
My thoughts board
There are numerous questions that I will strive to answer in my research. They are my motivators so that I created a particular space to save and manage them. 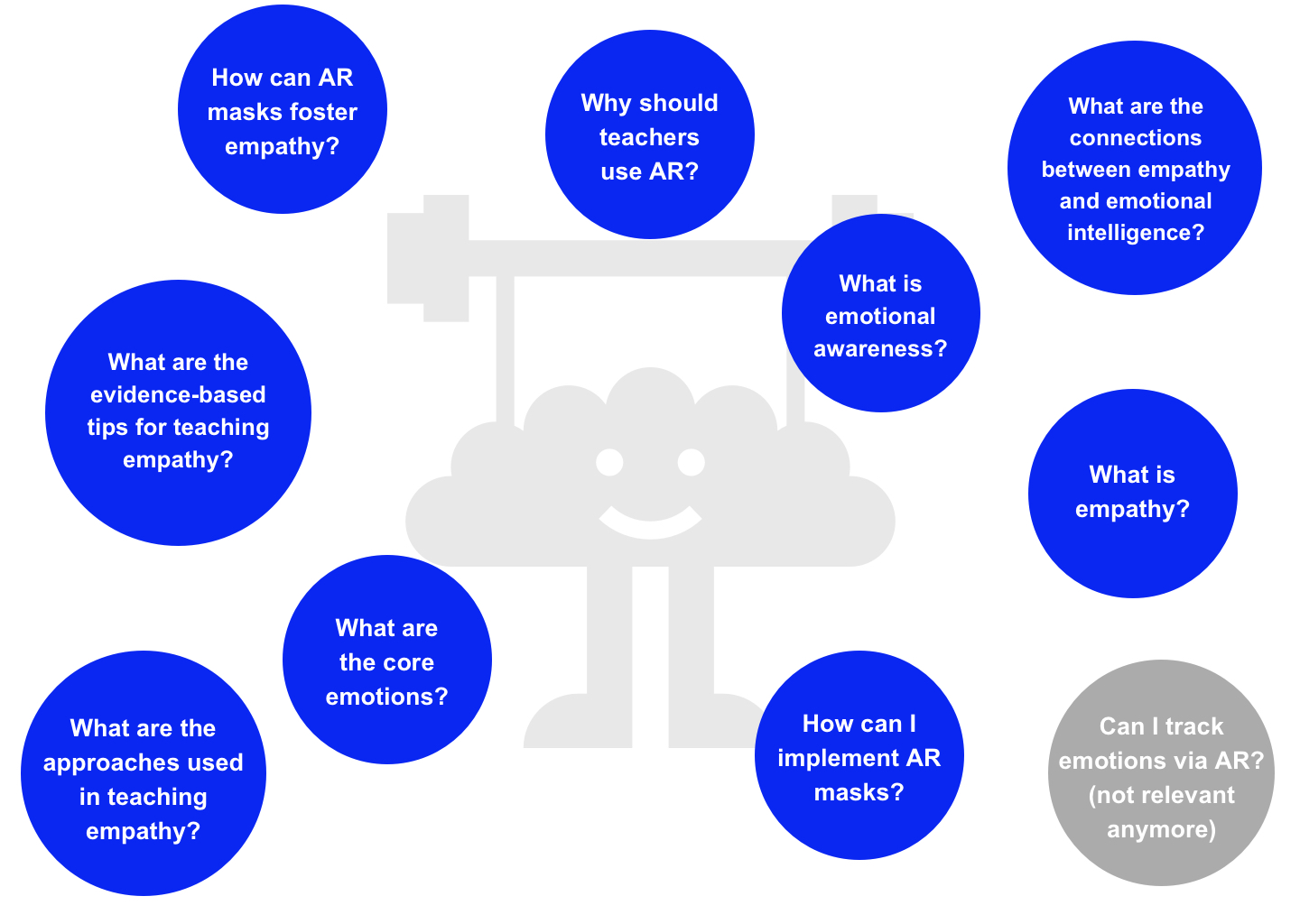 Implementation plan
Due to tight deadlines, I created the first basic prototypes during the research stage. It allowed me to receive feedback on my ideas and enhance AR masks before the final dissertation submission. 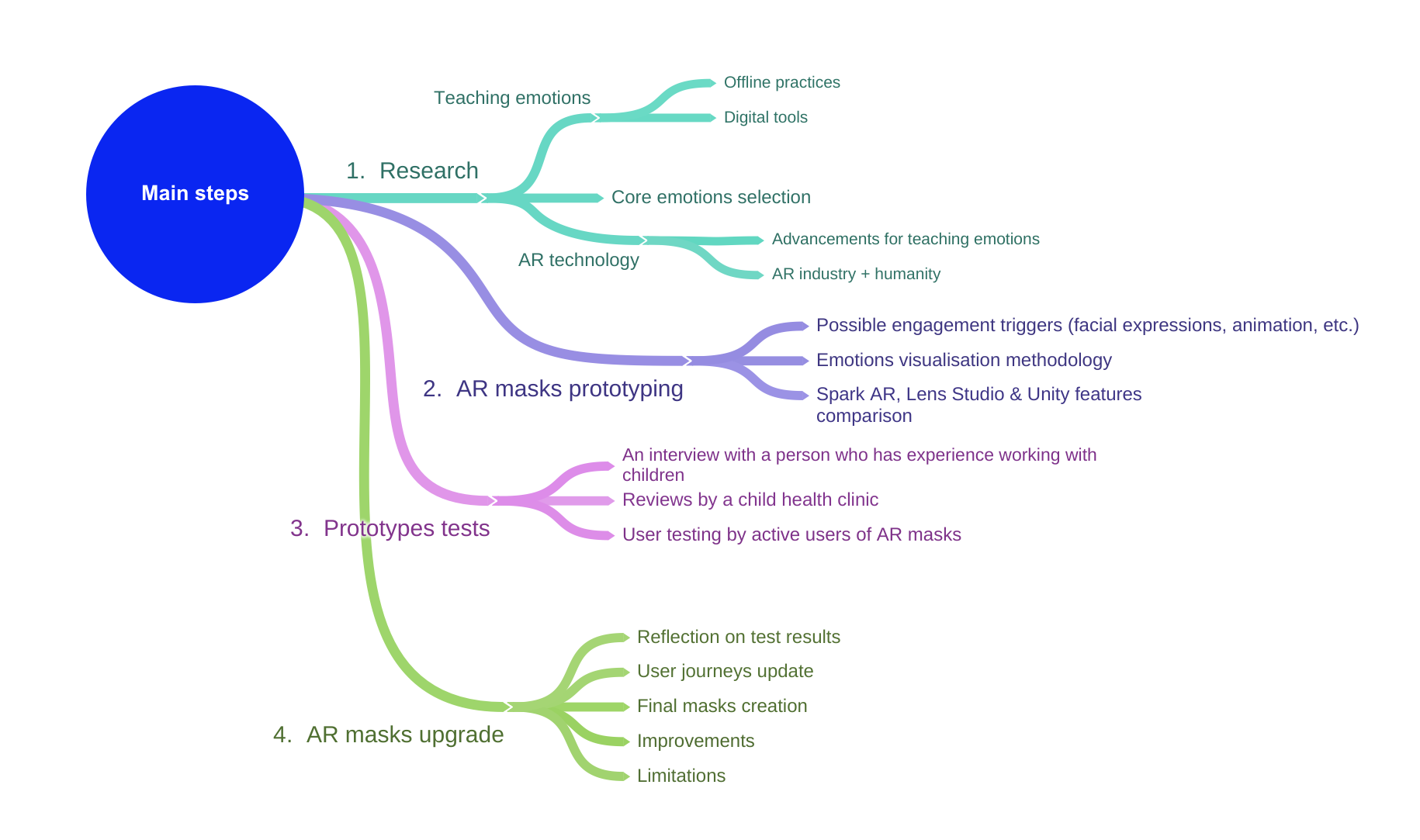 Inspirations
1. Inside Out, a 3D computer-animated comedy film →Inside Out personifies the five major emotions — Joy, Sadness, Fear, Anger and Disgust — residing in the mind of a preteen girl named Riley. Throughout the film, the five embodied emotions all work to guide and protect her.

After my film review, I discover many visually interesting concepts: from the use of colour for emotions' diversity to the memories storage based on emotions. However, the most valuable outcome is a visualisation of how emotions unite together to make more feelings. 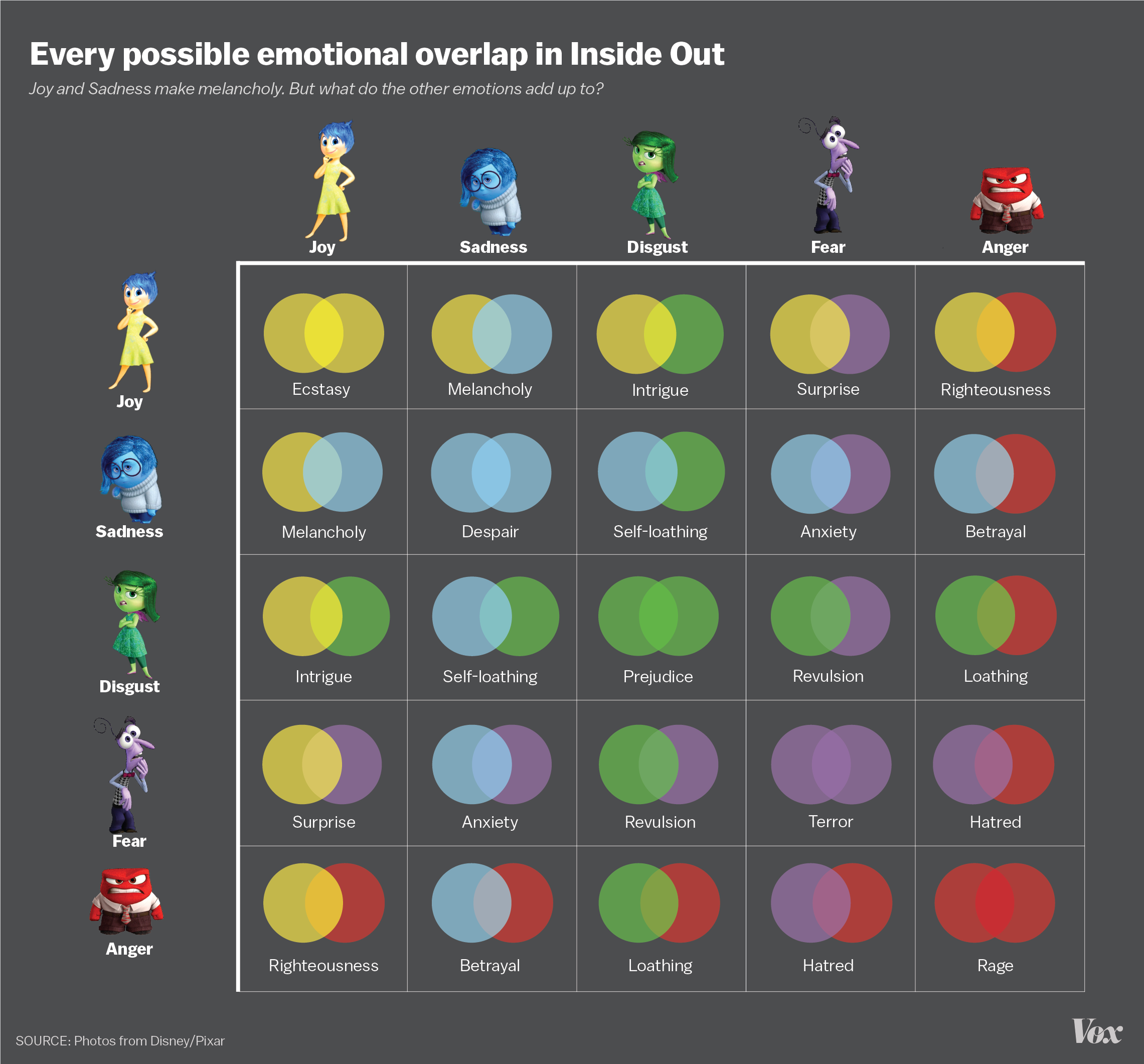 Emotions begin to blend together into newer, more complicated feelings. All the rights are owned by Disney/Pixar 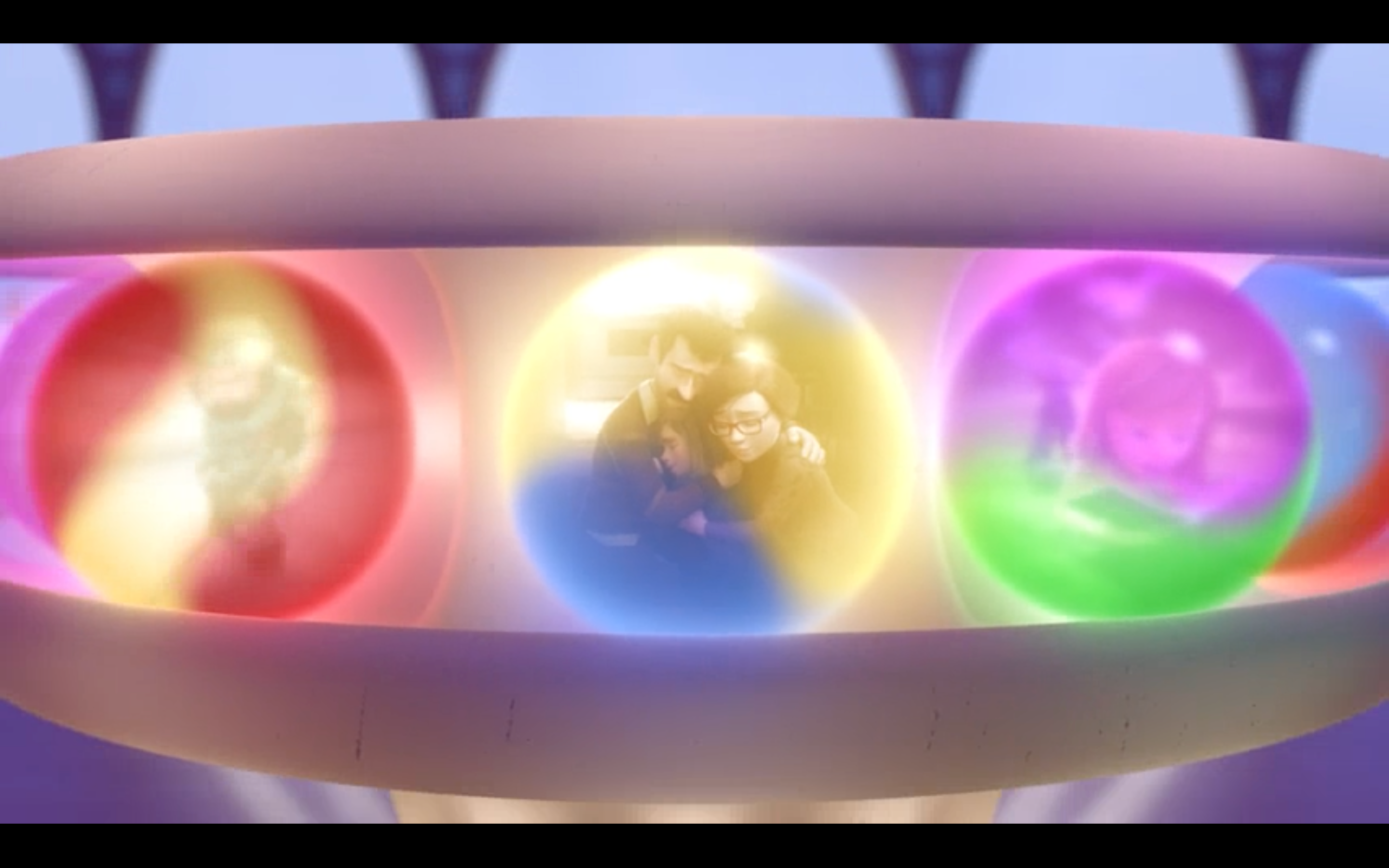 2. Apple ARKit overlay features →I have tested many ways of digital layering on the top of our reality. It helped me to feel and understand the benefits of the AR mode. For example, I did a test with a Chevening poster as a trigger for the AR experience. It allowed me to diversify storytelling with video and animation.
3. Instagram filters test →With the need for various users tests in mind, I had to choose the AR mask design tool that allows me to publish and change the concept quickly.There are several tools to consider for anyone interested in AR masks: Spark AR by Facebook, Lens Studio by Snap Inc, ARKit by Apple and Unity. My test sessions form an opinion that the most advanced and diverse possibilities for face ﬁlters are implemented only in Lens Studio and Spark AR. 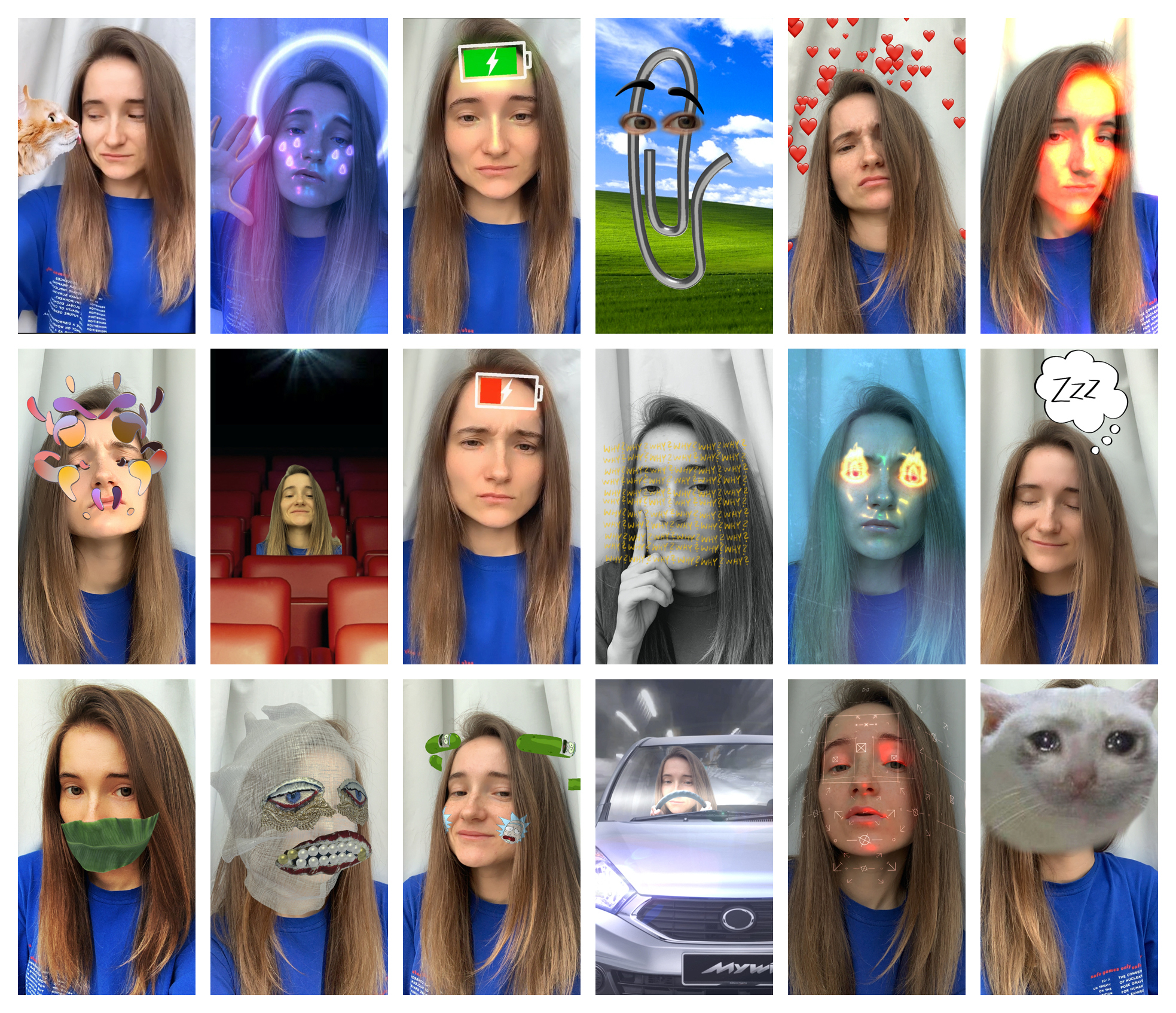 Literature
1. Augmented Human: How technology is shaping the new reality →Dr. Helen Papagiannis has been working with AR for 15 years as a researcher, designer, and technology evangelist. Her book enormously resonates with my views and research because the author believes that AR technology can make us more human. She dreams of seeing how AR will create more ways of meaningful human-to-human interactions.
2. The Oxford companion to the mind →This dictionary approach to the human mind comprises definitions and discussions by over 100 authorities and scholars. Richard L. Gregory, the author, was a British psychologist and Professor of Neuropsychology at the University of Bristol. Gregory's main contribution to the discipline was in the development of cognitive psychology, in particular that of "Perception as hypotheses", an approach which had its origin in the work of Hermann von Helmholtz (1821–1894) and his student Wilhelm Wundt (1832–1920). Helmholtz and Wundt laid the basis of investigating how the senses work, especially sight and hearing.

My research revealed that there are no AR masks case studies in education, despite the extensive AR masks use on social media platforms.

Empathy
Empathy is a fundamental part of emotional and social education. Research has shown that empathy is essential to building healthy and happy relationships with family and friends (Helen Riess, MD. The Science of Empathy, 2017). Empathic children tend to perform better in school, various social situations and their adult careers. Children and teenagers who have the most considerable amount of skill at empathy are viewed as leaders by their peers.

Empathy can also be a crucial factor in teaching kids what bullying is and how not to engage in bullying behaviour. Empathy lessons are thus an important foundation in preventing bullying in school (Dodaj A. The effect of empathy on involving in bullying behaviour, 2013).
Current result
This project is still in progress
I built a hypothesis that AR masks implication has the potential to enhance teaching emotions and to prepare children for a globalised future.

I intended to point out various ways to present emotions in AR and to ﬁnd a convenient design tool for their visualisation. My investigations show that Spark AR can facilitate the process of AR integration to education and allow testing many diﬀerent ideas at once.

Further investigations may include a collaboration with a psychologist to add additional empathy triggers hidden in illustrations. Also, the impact of cultural diﬀerences on the project must be considered while creating a set of masks for a speciﬁc healthcare centre.
Discover other projects →